Under the General Visa umbrella sits a number of subclasses of the Skilled Independent Visa, Spouse Visa and the Contributory/Aged Parent Visa.

Each subclass of the General Visa is different, requiring its own unique set of supporting documentation and evidence. It’s important to keep in mind that each person has their own individual story, therefore visa applications need to be treated individually with the process varying case by case.

At Endeavour Partners Group we are here to guide you through the often time-consuming, frustrating and overwhelming process of Australian visa applications.

To make the initial phase of an application a little less confusing, we have put together a FREE General Visa Checklist to illustrate what documentation is generally required.

Enter your details below to receive your copy of the checklist which will give you an idea of what you’ll need to gather to prove your eligibility for the visa and how to support your claims. 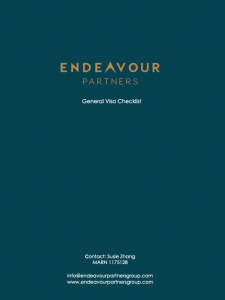 see how we’ve helped others with their general visa application

Situation
Faizan originally arrived in Australia on a Student Visa to complete his five-year Bachelor of Engineering degree before returning home to Pakistan. After living in his home country for one year, Faizan decided he wanted to return to Australia to settle down.

Solution
Faizan liaised with Endeavour Partners Group to determine what visa would allow him to return to Australia. Based on his age, qualification, work experience and English level the team established he was eligible for a Skilled Independent Visa Subclass 189.

To determine Faizan’s eligibility, Endeavour had to first get his qualification, skills and English assessed by authorised assessing bodies. Once the approved Skills Assessment was granted, the team proceeded with submitting the Expression of Interest (EOI) to the Australian Government.

Result
After a few months, the invitation from the Australian Government came through allowing Endeavour to immediately submit Faizan’s application for a Skilled Independent Visa Subclass 189. With no health or character issues to complicate the process, Faizan was granted the visa just a few months later. The entire process from the initial consultation to visa approval was approximately 18 months.
As a Permanent Residence visa valid for five years, Faizan was able to travel in and out of Australia freely. During this time, he also had the opportunity to apply for Citizenship once criteria was met.

Situation
Lian is a Chinese Passport Holder and a resident in Hong Kong and has two children from a previous relationship. Lian began a relationship with her partner while she was in Australia for a few months. Her oldest child wished to remain living and working overseas while her 24-year-old youngest, who was still studying, was happy to settle in Australia.

Solution
Lian employed Endeavour Partners Group to help her apply for a Spouse Visa. Based on Lian’s relationship and her evidence of the relationship at the time, the team advised that to effectively showcase a genuine relationship she needed to demonstrate a stronger commitment. With the guidance of Endeavour, Lian was able to successfully gather and provide the necessary supportive documents.
It’s important to remember that each individual case is different, requiring its own unique supporting documentation.

Result
Once all evidence was presented, Endeavour immediately lodged the Spouse Visa (Subclass 820) application and were able to include her 24-year-old child as a dependent.

The Subclass 820 is a two-stage visa. Lian was first granted a Temporary Visa with indefinite validity allowing her to travel in and out of Australia freely. After 2 years, she has the opportunity to apply for a Permanent Resident (PR) Visa by demonstrating she remains in a relationship with her Australian partner.

Once a Spouse Visa application is lodged, it can take up to 24 months to be processed for the first Temporary Visa stage then another 12 months for the PR stage.